Posted by Miles on August 16, 2014
Posted in: Uncategorized. Leave a comment 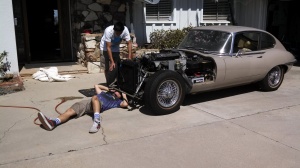 We now tend to think of media like this from dictionary.com: “The means of communication, as radio and television, newspapers, and magazines that reach or influence people widely. Media, like data, is the plural form of a word borrowed directly from Latin. The singular, medium, early developed the meaning ‘an intervening agency, means, or instrument.’”  I like those last few words:  an intervening agency, means, or instrument. That being the case, the Jaguar pictured here, a 1968 Series II XKE 4.2 is an absolute instrument for social media. I cannot drive it without people commenting on it, wanting to buy it, or just look / drool over it. It is a serious means of communication.

My father passed it on to me; it was his final Jaguar. He’d owned an XK150, a Yellow XKE, a red convertible XKE and finally the one pictured. He had never been without one as long as I can remember.  Favorite story: He and my mother were driving from Los Angeles to San Diego – about a 150 mile trip. It was in the middle of the 1973 oil crisis and stations were closed, gas was rationed and difficult to find. My parents left LA with a little over a quarter of a tank – probably 5 gallons. Somehow that XKE got them home.  Sure, those Jags were temperamental British cars, but baby, those cars have soul.